Eddy Current Testing (ECT) is a form of the Electromagnetic Testing (ET) method usually used for the detection of surface-breaking or near-surface defects in materials. It is typically used to perform the inspection of non-ferromagnetic metals, although the material under test can be a ferromagnetic metal. ECT is also less commonly used to inspect composite materials such as carbon fiber reinforced polymer (CFRP).

When the coil is placed in the proximity of a metal sample, eddy currents are induced in the material. Eddy currents in materials are analogous to eddy currents in fluids and thus how they received their name. In electromagnetic induction, eddy currents flow in a direction opposite to the coil current and thus also producing a counter force, or “secondary” field. The circuitry in an ECT system is normalized (a.k.a., “balanced”) to this opposing secondary field.

If the coil is moved to a location on the sample with a defect, the flow of eddy currents is disrupted, causing their paths and density to change. A subsequent change in the secondary magnetic field strength causes the balance of the system to change, which is then registered as a change in the impedance in the coil. A typical ECT system represents that change as a voltage measurement. Modern permutations of ECT technology include Eddy Current Array (ECA), Remote Field Testing (RFT), Magnetic Flux Leakage (MFL), and Pulsed Eddy Current (PEC). While the Electro Magnetic Acoustic Transducer (EMAT) technique relies on ultrasonic waves rather than eddy currents, it shares the same fundamental theories as Eddy Current Testing. 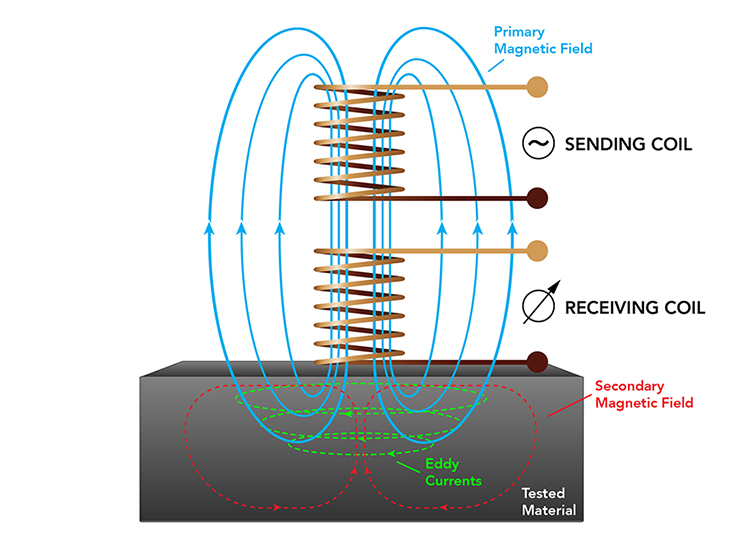 When and how should Eddy Current Technology be used?