The most common UT inspection techniques involve the use of bulk waves in which the boundaries of the structure are just reflectors that do not fundamentally change the mode of propagation. Bulk waves only have two modes; longitudinal and shear, and are typically used to inspect areas near the transducer.

Guided Wave (GW) testing on the other hand is a technique in which the ultrasonic waves propagate through the boundaries of a structure, and these boundaries actively affect the mode of propagation. Unlike bulk waves, there could be hundreds of guided wave modes with different velocities and frequencies on a given structure. The number of modes exponentially increases the complexity in the analysis, but also opens the door to countless new applications of UT. 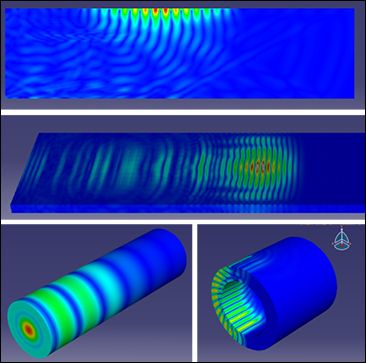 Since the boundaries of the structure permit ultrasonic waves to travel long distances with little loss of energy, one of the most common applications of guided waves is to cover long expanses of material from a single point of inspection. These applications are commonly referred to as Long Range UT (LRUT) and Medium Range UT (MRUT), depending on the distance covered. Under this classification, Short Range UT is used exclusively for bulk wave techniques (normal beam, angled beam) since they are typically used to inspect the area immediately below or in close proximity of the transducer.

Long Range UT (LRUT) refers to the use of guided waves for inspection of hollow cylindrical structures, such as pipes and tubes, using a ring of transducers placed around the structure. The interaction of all the beams from the different transducers contained within the tube geometry create a unified wave front that fills up the tube geometry and permits traveling long distances. Depending on the tube material and interfacial boundary conditions (e.g. tube coatings, surrounding soil / cement, liquids or solids inside the pipe), LRUT rings can be used to inspect up to approximately 300 ft (100 m) in front and behind the inspection ring.

Medium Range UT (MRUT) is a term introduced in the last decade to differentiate between bulk wave (short range) UT techniques and LRUT. MRUT uses Lamb or Shear Horizontal modes and can be used to inspect tubes and pipes, as well as plates / tanks and other non-round structures. While LRUT requires complex analysis of multimodal tubular modes (flexural, longitudinal, and torsional), MRUT uses single-sensor guided wave formulations which are much easier to calculate and interpret. The distance covered with MRUT varies with sensor aperture and tube diameter, but due to beam spread, maximum coverage is approximately 9 ft (2.7 m) in tubes, and 16 ft (5 m) in plates and tanks. In addition to easier interpretation, the main advantages of MRUT over LRUT are the smaller dead zone (typically less than 50 mm vs 1 to 2 m for LRUT), and higher resolution and defect detection capabilities, which can be up an order of magnitude greater than LRUT.

There is not a theoretical limit in terms of maximum thickness that can be inspected with guided waves, but for practical purposes, the limit is often set at around 1” (25 mm). Thickness up to 1.5” (37 mm) is also possible, but the presence of multiple modes can make interpretation difficult.